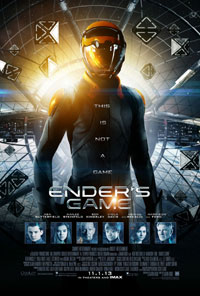 In the near future, a hostile alien race (called the Formics) have attacked Earth. If not for the legendary heroics of International Fleet Commander, Mazer Rackham (Ben Kingsley), all would have been lost. In preparation for the next attack, the highly esteemed Colonel Graff (Harrison Ford) and the International Military are training only the best young children to find the future Mazer. Ender Wiggin (Asa Butterfield), a shy, but strategically brilliant boy is pulled out... Full synopsis »

It took many, many, many, many years, but Orson Scott Card's incredible book "Ender's Game" has finally been adapted into a movie. A movie directed by Gavin Hood, the guy behind the atrocious X-Men Origins: Wolverine. Talk about settling. Thankfully, and rather surprisingly, Ender's Game is a worthwhile endeavor - though it's hardly the epic it could have been. Full movie review »
B-
FilmJabber
NA
Users
YOUR RATING
A
B
C
D
F
Movie Overview Movie Synopsis Movie Review Movie Trailers

The Latest Trailer for 'The King's Man' is Here

Are You Excited for the Snyder Cut Yet?