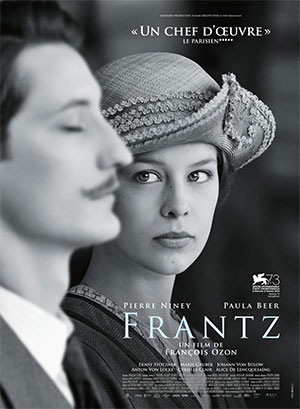 In the aftermath of WWI, a young German who grieves the death of her fiancé in France meets a mysterious Frenchman who visits the fiancé's grave to lay flowers.... Full synopsis »

Entrancing in all the ways I normally can’t tolerate, Frantz is an undeniably well-made drama that works much better than it has any right to. About a young Frenchman who arrives in Germany shortly after the end of World War I claiming to have known a family’s dead son—and the budding relationship he develops with the son’s fiancée—Frantz thrives on a thoughtful script, the restrained direction by François Ozon and terrific performances by Paula Beer and Pierre Niney. Full movie review »
A-
FilmJabber
NA
Users
YOUR RATING
A
B
C
D
F
Movie Overview Movie Synopsis Movie Review
Movie Trailers

'The Hunt' Emerges From Death with New Trailer