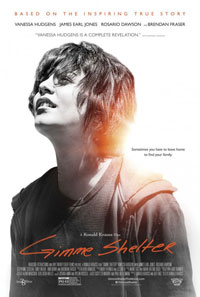 Based on a true story that centers on 16-year-old Agnes "Apple" Bailey (Vanessa Hudgens), "Gimme Shelter" uncovers the struggle for survival and the hope of redemption through the harsh realities of life on the streets. As a pregnant teenager, Apple’s journey plummets her into a perilous struggle until finding salvation in a suburban shelter for homeless teens. With provisions of unprecedented comfort, a collective sisterhood connection and female empowerment, the shelter elevates Apple to break... Full synopsis »

Another Disney Princess continues to rebel against her past in Gimme Shelter, a touching though ordinary drama about a teenage runaway who seeks refuge after discovering she is pregnant. The movie stars Vanessa Hudgens, Brendan Fraser and Rosario Dawson and is inspired by a true story. Full movie review »
C+
FilmJabber
NA
Users
YOUR RATING
A
B
C
D
F
Movie Overview Movie Synopsis Movie Review Movie Trailers

'The Platform' Thrills, Then Disappoints

'Birds of Prey' Review: As Bad as Suicide Squad?

What to Stream This Weekend