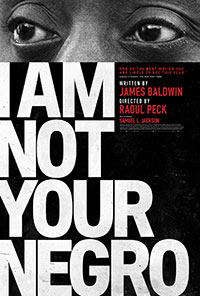 In 1979, James Baldwin wrote a letter to his literary agent describing his next project, Remember This House. The book was to be a revolutionary, personal account of the lives and successive assassinations of three of his close friends—Medgar Evers, Malcolm X and Martin Luther King, Jr.

At the time of Baldwin’s death in 1987, he left behind only thirty completed pages of this manuscript.

This is why you don’t take books and literally translate them to the screen. I Am Not Your Negro, one of the five films nominated for Best Documentary Feature at the 2017 Academy Awards, is a poetic, somber look at race in the United States through the eyes and words of acclaimed writer James Baldwin. It’s also a dull, meandering and trying experience. Full movie review »
C-
FilmJabber
NA
Users
YOUR RATING
A
B
C
D
F
Movie Overview Movie Synopsis Movie Review Movie Trailers