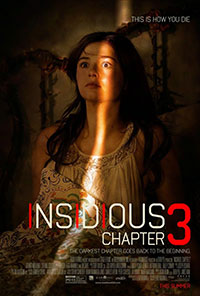 The newest chapter in the terrifying horror series is written and directed by franchise co-creator Leigh Whannell. This chilling prequel, set before the haunting of the Lambert family, reveals how gifted psychic Elise Rainier (Lin Shaye) reluctantly agrees to use her ability to contact the dead in order to help a teenage girl (Stefanie Scott) who has been targeted by a dangerous supernatural entity.... Full synopsis »

The first Insidious was an incredibly scary, intense horror-thriller. Insidious: Chapter 2 was still scary, but fell apart in the second half. And now there’s the poorly titled Insidious: Chapter 3--poorly titled because it’s a prequel--that is more consistently moody but lacks the frights found in the other films. Full movie review »
C+
FilmJabber
NA
Users
YOUR RATING
A
B
C
D
F
Movie Overview Movie Synopsis Movie Review Movie Trailers

'Thirteen Lives' is On Amazon. It's More Than Worth Watching.

'Prey' is the Best 'Predator' Movie Since 'Predator'

'Nope' Not Quite a Yep