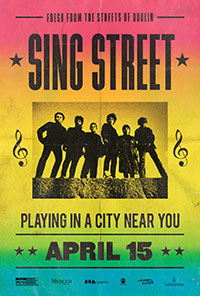 "Sing Street" takes us back to 1980s Dublin seen through the eyes of a 14-year-old boy named Conor (Ferdia Walsh-Peelo) who is looking for a break from a home strained by his parents' relationship and money troubles, while trying to adjust to his new inner-city public school where the kids are rough and the teachers are rougher. He finds a glimmer of hope in the mysterious, über-cool and beautiful Raphina (Lucy Boynton), and with the... Full synopsis »

Like a girl? Start a band. Wear makeup. Simple. John Carney’s follow-up to the musicals Once and Begin Again is a movie with such a dreadfully dull and off-puttingly lame title that I immediately dismissed it out of hand when it debuted in theaters, but Sing Street is a heartfelt and engaging drama, though if it feels a lot like countless other coming-of-age stories. Full movie review »
B-
FilmJabber
NA
Users
YOUR RATING
A
B
C
D
F
Movie Overview Movie Synopsis Movie Review Movie Trailers

The New 'Scream' is a Lamer Version of 'Scream'