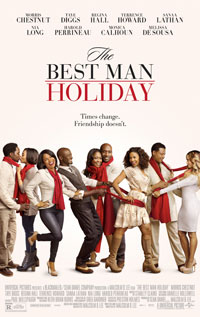 Written and directed by Malcolm D. Lee, the 1999 film starred Taye Diggs as Harper Stewart, a novelist whose autobiographical work has its release unfortunately timed with the wedding of his best friend, Lance Sullivan (Morris Chestnut), as the book reveals a secret relationship he once had with the bride-to-be.

The Best Man Holiday is a funny, entertaining comedy... until it becomes a depressing and an advertisement for faith and Christianity. Nevertheless, it's fun to see Taye Diggs, Morris Chestnut, Terrence Howard, Sanaa Lathan and the rest back together again. Full movie review »
B-
FilmJabber
NA
Users
YOUR RATING
A
B
C
D
F
Movie Overview Movie Synopsis Movie Review Movie Trailers

A Review of the Surprisingly Good 'Monster Hunter'