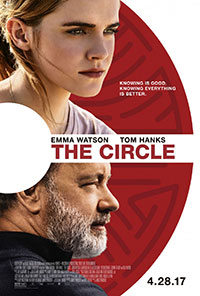 Based on the international best-seller by Dave Eggers, "The Circle" is a thrilling modern morality tale starring Emma Watson, Tom Hanks, and John Boyega. As she rises through the ranks of the world's largest tech and social media company, The Circle, Mae (Watson) is encouraged by company founder Eamon Bailey (Hanks) to live her life with complete transparency. But no one is really safe when everyone is watching.... Full synopsis »

Tom Hanks used to be the beacon of quality, but now he stars in middling movies like The Circle, a non-thrilling thriller that is so insufferably nothing-nothing it’s hard to evoke any emotion—such as hate—at all. Hanks plays the CEO of a Facebook-esque technology firm seeking to take over the world, but it doesn’t really matter because practically nothing happens for the film’s entire runtime. Full movie review »
D
FilmJabber
NA
Users
YOUR RATING
A
B
C
D
F
Movie Overview Movie Synopsis Movie Review Movie Trailers

'The Little Things' Has Big Problems