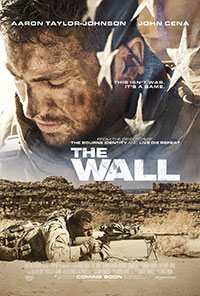 “The Wall” is a deadly psychological thriller that follows two soldiers pinned down by an Iraqi sniper, with nothing but a crumbling wall between them. Their fight becomes as much a battle of will and wits as it is of lethally accurate marksmanship. Directed by Doug Liman ("Mr. & Mrs. Smith," “The Bourne Ultimatum,” “Edge of Tomorrow”), “The Wall” stars Aaron Taylor Johnson (“Nocturnal Animals,” “Kick-Ass,” “Savages” “Godzilla,” “Avengers: Age of Ultron”) and WWE... Full synopsis »

Review by Jason Jean (B)

THE PLOT: It's 2007 and George W. Bush has declared the Iraq war over. A fact completely lost on an Iraqi sniper named Juba "The Ghost" (Nakli) who is still engaging and annihilating as many western targets as he can find with his rifle scope. When a sniper team (Taylor-Johnson, Cena) stumble upon a construction site littered with the corpses of dead contractors - both military and construction - on an ordinary recon mission they're soon confronted by the terrible truth that perhaps their war isn't as over as they'd been informed it was. Full movie review »
B
FilmJabber
NA
Users
YOUR RATING
A
B
C
D
F
Movie Overview Movie Synopsis Movie Review Movie Trailers