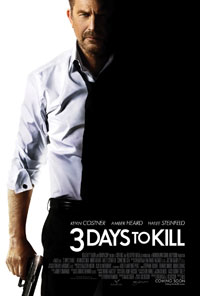 In the action thriller, Kevin Costner plays an elite government hit man who after receiving news that he has a terminal disease, decides to give up his high stakes life to finally build a relationship with his estranged wife and daughter, whom he's previously kept at arm's length to keep out of danger. But when his agency offers him an experimental, potentially life-saving drug in exchange for one last mission, it's an offer he can't... Full synopsis »

It may take Kevin Costner 3 Days to Kill, but it took only 110 minutes for director McG to kill my hopes, dreams and aspirations. A wretchedly bad thriller muddled by sappy family drama, 3 Days to Kill is one of the worst movies of Costner's career, and will easily stand as one of the worst of 2014. Full movie review »
D-
FilmJabber
NA
Users
YOUR RATING
A
B
C
D
F
Movie Overview Movie Synopsis Movie Review Movie Trailers