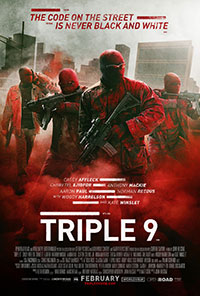 In TRIPLE NINE, a crew of dirty cops is blackmailed by the Russian mob to execute a virtually impossible heist and the only way to pull it off is to manufacture a 999, police code for "officer down.” Their plan is turned upside down when the unsuspecting rookie they set up to die foils the attack, triggering a breakneck action-packed finale tangled with double-crosses, greed and revenge.... Full synopsis »

The solution to our nation’s crime problems isn’t police cameras or border walls or Donald Trump. It’s much simpler than that: let bad people kill other bad people, and in the end, it will all work out for the better. So it goes in Triple 9, a dark, gritty and tense action-thriller that plays out like Heat meets Ten Little Indians, only not quite as good or intelligent. Full movie review »
B
FilmJabber
NA
Users
YOUR RATING
A
B
C
D
F
Movie Overview Movie Synopsis Movie Review Movie Trailers

'The Little Things' Has Big Problems