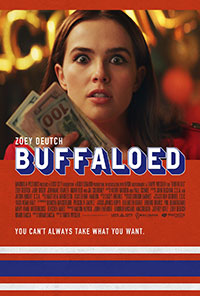 I watched Buffaloed for two reasons: 1) Zoey Deutch is a riot; and 2) my dad is from Buffalo. Tanya Wexler’s crime-comedy certainly gives Deutch a feisty role to feast on, and there are more than a few Bills jokes--Deutch’s character, Peg, gets arrested for the first time for selling fake football tickets to her fellow Buffalo locals.

The movie itself parallels the Bills’ fortunes following those four fateful Super Bowls in the 1990s: there are ups and downs, a few long passes that strike perfectly, but in the end, it can’t quite get into the end zone.

Buffaloed is amusing primarily for the sheer energy Deutch brings to her role. For those who have followed the cute, petite actress over the years, Deutch is known for bringing a comedic intensity that defies her small, innocent appearance; her performance in Buffaloed is no different. As an ethically challenged, arguably sociopathic greed-machine who wants to make more than a few bucks at any cost, Peg is a carnal wrecking ball and Deutch is perfectly cast for the role. She’s a blast to watch.

The rest of the movie… is pretty forgettable.

As much as Wexler and writer Brian Sacca attempt to spin their story of competing debt collectors into comedic gold, the screenplay just isn’t good enough. Deutch elevates the material as best she can, but she veers dangerously close to desperation mode at times as she attempts to scrounge every little bit of humor from the words on the page. But the words on the page simply lack the sharpness, the dark humor, Buffaloed needed. It’s not a complete misfire by any means--at a taut 95-minutes, the movie operates at a quick pace, evoking more than a few chuckles--but you never feel buffaloed, whatever the hell that means.

Buffaloed has a lot of things going for it, but the screenplay needed another pass to elicit the most from its cast, most notably its star who was more than ready to collect your payment… if given the right ammunition.

Controversial 'Antebellum' is Almost Great but...

The 'Dune' Trailer is Here

The 'No Time to Die' Trailer is Explosive Fury

Was 'Mulan' Worth the 6-Month Delay?