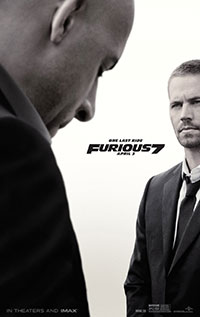 There’s a fine line between intentionally stupid and just plain out dumb, and Furious 7 understandably straddles that line. Unfortunately, it veers to the wrong side more often than not, resulting in a blockbuster that delivers plenty of absurdly entertaining action stalled only by storytelling that is downright bad, even by this franchise’s standards.

The Fast and Furious franchise peaked with Fast Five and kept pace with the good-but-not-quite-as-good Furious 6. The last two, undeniably the best of the bunch, thrived due to a couple key decisions: to embrace the franchise’s over-the-top temperament, and to add Dwayne Johnson to the cast.

Furious 7 is easily the most ludicrous of them all, and while the filmmakers seem to be proud of that fact, they shouldn’t be.

The action is still a ton of fun, and when all is said and done, that’s what matters. A massive car/truck chase that begins with the team parachuting—cars in tow—from an airplane and ends with them purposefully driving off cliffs to what in any other movie would be certain death is a blast. A sequence where Vin Diesel and Paul Walker drive a multi-million-dollar car from one skyscraper to the next—a hundred floors off the ground—is so stupid it works. And the climax, which involves cars, helicopters, drones and of course a parking garage, is entertaining.

But even with the action you can see signs that the franchise has jumped the shark. Go back to Fast Five and there were plenty of silly moments, but they largely operated by stretching the limits of physics. Furious 7 basically looks at the camera and says f**k-you to reality. For the time being, the action still works, but it’s not hard to envision the next one becoming a parody of itself.

As mindless as the action is, the real problem is the story, and the way everything is pieced together. Movies like Furious 7 don’t necessarily need fantastic stories, or terrific writing, or quality actors (seriously, Vin Diesel is AWFUL in this), but new director James Wan (Saw) and returning writer Chris Morgan must think we’re stupid.

The plot for Furious 7 could have been great—a revenge-seeking assassin (Jason Statham) attempts to kill the team, and the team fights back accordingly—but Morgan instead bogs things down with a tedious, cliché cluster of scenes involving the CIA hiring the crew to recover a stolen piece of technology that will allow them to find Statham’s character—even though the crew doesn’t need the tech to find the guy. He literally shows up everywhere. Even in a movie that is intentionally stupid, there is no reason why the plot should be painfully bad.

To make matters even worse, any of the scenes where the actors actually have to act are pretty cringe-inducing. The chemistry-less moments between Diesel and Michelle Rodriguez are terrible. Hell, anytime Vin Diesel is forced to say anything—especially involving “family”—I wanted to fast forward.

The only sincere part of the movie is the touching tribute to the late Paul Walker; the movie sends him off in the right way.

Furious 7 is dumb—more dumb than it needed to be—but it has enough fast and furious action to be entertaining. But that’s about all that can be said. This franchise is on the verge of driving over a cliff. Paul Walker may have been the lucky one after all.*

*Not really. I’m going to hell for saying that.

The Best Movies on Netflix this August

Liam Neeson Debuts as the 'Honest Thief' in First Trailer