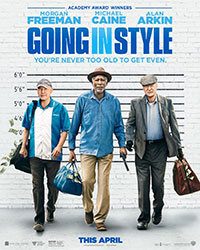 If you decide to skip bingo this weekend to watch the geriatric crime-comedy Going in Style, you’re reaction will likely be similar to mine: at least the grandparents will like it.

Michael Caine, Morgan Freeman and Alan Arkin headline the star-studded picture, which is about three retirees who decide to rob a bank after their pensions are dissolved. The comedy, written by Theodore Melfi (Hidden Figures) and directed for some reason by Zach Braff (Garden State), basically involves the three men talking about how old they are until, finally, the robbery actually occurs.

Unfortunately, and as expected, Going in Style just isn’t very funny; it relies on tired, lazy humor that is clearly aimed at a much older target audience, but even with that in mind there just isn’t much to get your jumpers in a bunch. While the three leads are solid, as is Ann-Margret, it appears that Braff just let them sit in a room and talk about whatever for an hour and a half. It isn’t very entertaining.

With a running time of just over 90 minutes, Going in Style feels longer; it isn’t a terrible watch--it has it’s amusing moments, and I chuckled a couple times--but the movie makes little effort to establish why it exists in the first place.

Its one saving grace is the heist itself: while the characters do plenty of stupid things post-robbery to all but ensure they’d get caught, Braff does a good job detailing their efforts to provide an alibi. It’s no Ocean’s Eleven, but the film’s climax is certainly a highlight (however, the less said about the film’s final 10 minutes, which drag on and on and on like an ending or two out of The Lord of the Rings, the better).

Going in Style is exactly what you’d expect: a marginally satisfactory “comedy” that relies on weak old-person jokes that only your grandparents will fully appreciate.

Is the New 'Mortal Kombat' Any Good?