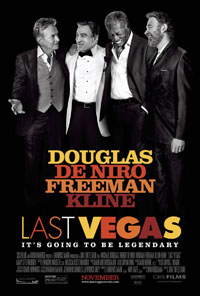 The Hangover meets The Bucket List in Last Vegas, a bachelor party comedy starring Michael Douglas, Morgan Freeman, Robert De Niro, Kevin Kline and lots of old people jokes. Entertaining and funny, Last Vegas is only dragged down by a heavy dose of sentimentality, something that likely won't bother the target audience of retirees and women who like much older men.

Douglas stars as Billy, a 70-year old playboy who has decided to marry his much younger girlfriend, because why not. He recruits his pals to join him in Vegas for a bachelor party, who are more than excited to get away from their slowly decaying lives. Except for widower Paddy (De Niro), who still holds a grudge against Billy for something that happened in the past.

That something-that-happened-in-the-past is what rounds out the Jon Turteltaub movie but also veers the story into obnoxious cheese territory at times. The movie's syrup-dripping sentimentality is distracting at times, but it also gives the guys a bit more to deal with than just alcohol, bikinis and pill jokes.

But for the most part, Last Vegas is just fun. It's not a great movie nor is it particularly innovative, but it's fun and the actors involved clearly had a blast making it. They play off each other well, the result being a consistently entertaining and occasionally laugh-out-loud funny affair.

The movie falters a bit toward the end as it angles toward a completely predictable conclusion - followed by several unnecessary tack-on moments - but Last Vegas never promised it was going to be much more.

Last Vegas is not as funny as The Hangover nor is it as well made as The Bucket List, but it is an entertaining, lighthearted comedy nonetheless. While it will appeal to older audiences the most, it's a movie anyone can enjoy as long as you don't go looking for more than what it was ever meant to be.

'The Hunt' Emerges From Death with New Trailer