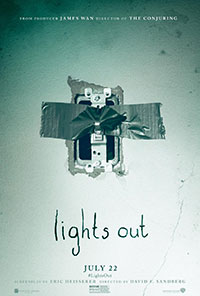 Don’t turn off the lights takes on new meaning in Lights Out, a creepy albeit straightforward horror movie from director David F. Sandberg and producer James Wan.

Teresa Palmer stars as a young woman who becomes concerned when her little brother claims that their off-her-rocker mother has become friends with something in her home—something that can only be seen when the lights are out.

In a normal year, Lights Out would have been considered a pretty good horror movie—it’s got a few good scares, a creepy premise and Teresa “yes I’m married but I can still have a crush on her” Palmer. In 2016, amidst a resurgence of high-quality and compelling horror fare (from The Witch to Wan’s The Conjuring 2, this year has delivered in major ways), Lights Out is merely okay, a PG-13-rated horror-thriller that works out about as you’d expect.

Lights Out is most interesting in the first act, when Sandberg first introduces us to the frightening, always-in-the-shadows Diana. The best moment comes early on, when young Martin (Gabriel Bateman) wakes up, wanders down the hall and turns the corner to see his mother (Maria Bello) talking to someone in her dark bathroom. It’s a legitimately disturbing minute of filmmaking.

Diana herself is your typical but no less scary movie monster, a dark entity that lurks, scratches and hisses in the way movie monsters do these days.

Unfortunately, the story eventually devolves into cliché horror tropes—psychiatric patients, evil kids trapped in basements, etc.—that keeps Lights Out from standing out in any way. The movie looks nice and at just 80 minutes is briskly told, but the final act, set in a house where a seemingly unstoppable monster hunts the protagonists, has been done many times before.

Lights Out is a perfectly fine horror movie, but that’s all it is.