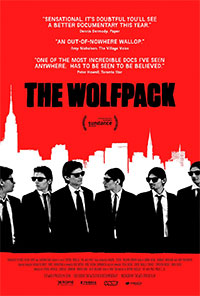 The Wolfpack is about the oddest of families, a documentary that follows six teenage boys, who, along with their mother and sister, have remained locked up in their New York City apartment by their controlling father for a whopping 14 years. Though unable to interact with people outside their own family, the boys remained connected to society through movies, which they love to depict with intricate reenactments.

Directed by Crystal Moselle, the documentary shows these boys finally venturing into the outside world, experiencing things like the ocean or fall colors for the first time—or at least since they were small. Along the way she features interviews with the family, as well as footage of their home movies—including their own version of Reservoir Dogs.

The subject matter is fascinating, which makes the full documentary so aggravating. For a while, you’re entranced by these boys, most of whom sport long, waist-length hair and a shockingly positive attitude. They are full of life and energy, seemingly kind and boasting an innocence few teenagers these days can boast. Despite having been sealed inside an apartment for much of their lives, they seem unafraid of the outside world, their ability to reintegrate impressive.

But you watch the movie with the promise that the documentary will explain how the hell things came to this, how a man could control his family like this and get away with it, how his boys could grow up to be generally normal, how the boys wouldn’t be so desperate to leave their home they wouldn’t do it sooner, that it’s impossible not to be disappointed when the documentary fails to answer any of those questions.

Sure, Moselle attempts to answer a few of them—the father likely has paranoid delusions, and is afraid out of the outside world, and one of the boys does eventually decide to leave the home to explore the city (albeit wearing a Michael Myers mask)—but the documentary barely scratches the surface of the enigma, leaving more questions than answers.

Whereas the first 30 minutes or so are captivatingly simply because of the subject matter, The Wolfpack’s latter half is equally shrug-worthy, adding little complexity to what has already been shown and unwilling to dive deeper into the psychological implications of what you’re watching.

Given the material, The Wolfpack would work best as a half hour snapshot on television; Moselle’s frustrating refusal to dig further leaves so much potential on the table.

The Badass Viking Epic 'The Northman' is Now on VOD

Watch the First 'Avatar: The Way of Water' Teaser